“Y’all ain’t from around here.”

This sentence is a familiar one. The idea that a person rolling through town is so foreign that they can be called out upon sight. Hell, we’ve all been tourists and likely, we’ve all felt out of place. It’s normal; it’s part of the human experience. We acclimate to our familiar home settings and become one with the people we complain about. We might even be more like the people who bug us than we think.

What is it that’s so fascinating, this idea of a Stranger Coming to Town? How did this idea even make it into our media? Why is this a popular means of storytelling? It might have stemmed from The Lone Ranger and his wholesome Ned Stark moral code honor crap.

The more I paid attention to some of the movies I’ve seen, from the good to the ridiculous, it came to my attention that this variation on story telling wasn’t even just a trope.

Movie after movie, I watched them. Time and time again, I saw repeating themes in these movies that seemingly had nothing in common. There was no other choice- I knew I had to share my evidence with you.  Join me as we tear apart a strange, yet incredibly amusing, movie genre known as The Stranger Comes to Town (or) Small-Town Jesus.

Just so you understand where I’m going to go with this today, I’ll first give you a list of the movies where this Stranger theme is present. There very well could be more, but these are the ones I’ve plucked out that hit the sub-genre the hardest.

Take a look at these films on the list. Let them really mull and churn through your head for a second. Off the bat, do they even seemingly appear to have anything in common? Who in their normal mind would compare Demolition Man to Son in Law? Pleasantville to Sister Act? And most important, who would even be stupid enough to look at the riveting Vanilla Ice Masterpiece Cool as Ice and first, declare it worthy to be categorized as a film, and second, be insane enough to even talk about it on any kind of critical level?

Breaking Down the Films

Now that we understand the genre, let’s look at one thing these films all have in common to make them work. That is, the towns people are morons, although there’s usually one person susceptible to change which snowballs the narrative. Typically, this is a love interest or a person who will connect in a deep friendship with our hero, “The Stranger”.

Now, from my experience with my favorite Stranger movies, they all sort of function like this:

Examining the Films through the Filter

Laugh at me all you want; Son in Law is excellent. Pauly Shore was at peak Pauly Shore in the early-mid-90s and this movie is a perfect encapsulation of his flavor of comedy. Which, really, was him being weird and the rest of the characters observing it making wrinkle-tooth face. It worked beautifully in Encino Man, where Shore played the eccentric best friend Stoney to Sean Astin’s straight-man Dave. So, with a character so popular who deserves his own movie…what sort of narrative do you give the character?

Son in Law is the subgenre in a nutshell. If you ever want to explain to someone what a “Small-Town-Jesus” movie is, this is the perfect place to start. A harmless, whimsical character (from California, because we’re so kooky here) comes to town with his platonic female friend. He enters a South Dakota town full of ignorant morons and gets everyone dancing, dressing like him, talking like him, and sleeping in the same beds as their spouses in no time. By the end of the movie, Pauly Shore’s “job here is done”, he eats Thanksgiving with his friend’s family, and the movie ends.

Footloose is another defining movie in the sub-genre, but it takes the whole messianic message to just a little bit of a crazier place than a silly movie like Son in Law does. First off, Kevin Bacon rolls into a town (of morons) where dancing is illegal. Like, really…do you know how absolutely ridiculous that sounds on paper? Sure, the movie is loosely…loosely…very loosely based on events that apparently happened. But even if the original story boarders the mundane, there’s something terrifying here, and that’s fascism. The idea that your individualism is snuffed is quite scary to people, even if it’s in a fun, carefree package like Footloose. The people are repressed. A stranger comes out of nowhere, takes a stand, and saves the people by helping them regain their freedom.

Pleasantville is a slight twist on the simplified trope aspect we have in Son in Law and Footloose because the film’s brother/sister combo (played by Tobey Maguire and Reese Witherspoon) are sucked into a television show (IE, a world of morons) where everyone suddenly addresses them by character names Bud and Mary Sue. The brother is stoked to be in this black and white paradise of the “American good old days”. He knows the show inside and out, has seen every episode, and thinks things are perfect the way they are. (He even yells at his sister for trying to make changes in this perfect world).

Meanwhile, the sister is horrified by said morons (no one knows what music is, sex is, or what’s outside of Pleasantville) and wants challenge those beliefs (by taking it to the bone-zone with a young Paul Walker because hello, young Paul Walker) and liberating the people to the point where the black and white world turns to color.

When the adventure is said and done, the brother goes home and the sister stays in Pleasantville. The stranger rolled through town, the changes were made, the people were saved.

Piggybacking on the idea of The Stranger getting sucked into the world against their will, let’s take a moment to examine To Wong Foo, Thanks for Everything Julie Numar (definitely one of the most run on movie titles since Don’t be a Menace to South Central while Drinking your Juice in the Hood). The movie stars Patrick Swayze, Wesley Snipes, and John Leguizamo as drag queens on a road trip. The trio are stranded in a small town full of racist, sexist, and homophobic men.

While various adventures ensue, the core of the story involves Swayze’s character Vida Boheme protecting and listening to the repressed women of this small town, teaching them how to have strength and agency over their own time, looks, and sexuality. The trio roll through the town, bestow their knowledge to the simple and repressed, and move on to another town. There is a simple, seemingly humorous, but deep message within the film.

Now, let’s erase and destroy that by talking about the world’s biggest dung heap Cool as Ice.

Like, for real…my god. I can’t believe I’m even trying to apply any sort of analysis to this insult to movie making, this junk film. What a waste of everyone’s time. All I can do is just be glad people got paid. That’s the only silver lining. 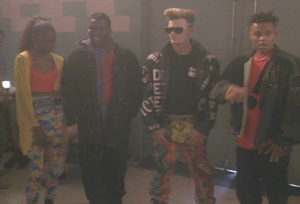 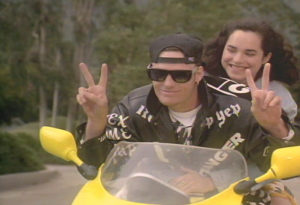 Let me start by saying this puke pile has a five-minute opening sequence of Mr. Ice howling into a microphone with “urban dance imagery” providing the background. Mr. Vanilla is a rapping drifter, apathetically traveling from town to town, harassing women as he sees fit and encouraging them to break up with their boyfriends by providing the pressing, if not harrowing advice of “Drop the zero and get with a hero.”

Ugh, my ovaries just shriveled up and vomited.

Ice and his crew become stranded in a town after one of their motorcycles break down. Naturally, it takes much longer than realistically necessary to fix the damn thing, which gives “the crew” ample time to turn the shit town around with their hip urban rapping and suave, natural swagger.

There’s a forced B-side story about Vanilla’s love interest’s dad like, murdering a dude, or her little brother getting kidnapped…I don’t know. It’s all the worst. But instead of adding layers, it just makes the movie weirder than it was. Ice and crew leave the town with his love interest saddled up on his steel horse behind him. God, I hate this movie. Vanilla Ice, the messiah. This movie is supposedly a remake of the Marlon Brando film The Wild One but even the synopsis of that flick is less embarrassing than this drivel.

There’s something to be said though about the “Messiah with a Secret” trope ingrained in some of these movies, which is present in both Road House and Sister Act (which is even better because it takes place in a church). Think about it: In Road House (another Patrick Swayze as the Small-Town Jesus movie) he shows up to act as the bouncer for this weird little road-side bar to protect a town from a corrupt businessman. He has a mysterious past that only comes to the surface after the viewer is invested in his character. The twist? He killed a dude. But regardless of his former actions, Swayze rolls into town and makes everything better, albeit with a sweet action background.

Similarly, in Sister Act, Whoopi Goldberg’s character (a lounge singer) is on the run after witnessing a murder. Some dudes are out to put a hit on her, so she hides out in a church. Bored by the strictness of the church, she “shows the women the musical way” and amps up their choir.

The Mother Reverend doesn’t approve, but the community is ecstatic, and people are finally coming into the run down, empty church on Sundays. The B-side plot gets even more “Small-Town Jesus” when Goldberg convinces the other nuns to leave the church and clean up the community.

And finally, the last film in our experiment: Demolition Man. I love this movie. It kicks so much ass. Seemingly not as cut-and-dry Stranger Comes to Town as some of out other films, Demolition Man has a specific twist on the sub-genre.

The Small-Town Jesus…was resurrected. Think about it!

A police officer put into cryostasis was brought back from his frozen state to save a town of morons. What I love about Demolition Man is Wesley Snipes (again) playing the entire 90s. Seriously, if all of the 90s were stuffed into a machine, the outcome would be Wesley Snipes in Demolition Man. The movie is a legitimate story, an excellent one at that, but the messianic message rides the forefront with the idea of the resurrected police officer, the crime-free town of simple people, and Stallone’s ability to teach a pretty lady what kissing is all about.

And really…why shouldn’t every restaurant in the future be Taco Bell?