The Literary hero and dark lord and master himself, R.L. Stine once said that humor and fear are very closely tied. We get scared, yet once we realize everything is okay, we laugh. It’s a sweet and innocent anecdote that perfectly sums up the childhood experience of being scared by a harmless, and welcomed boo.

But what happens when we get older?

Well, for many of us, nothing. We either read or watch scary stories, revel in the rush of adrenaline brought on by the fear, the heightened senses, the wondering who could be nearby…watching us. But, if you’re a pervert like me, you look at scary stories and horror movies and you’re gazing at the antagonist with sexual intrigue.

After all, they’re nothing more than bad boys in disguise, right?

5) Pennywise the Clown from IT 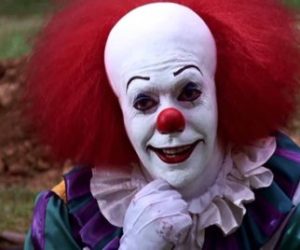 Before we start with the actual character Pennywise the Dancing Clown, let’s start off with the two actors who have tackled the role of the unpredictable clown. First Tim Curry in the original 1990 mini-series, and then Bill Skarsgard in the 2017 remake. And what do these two actors have in common? 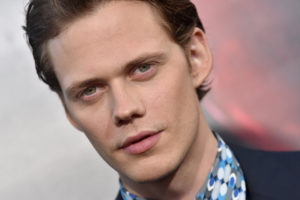 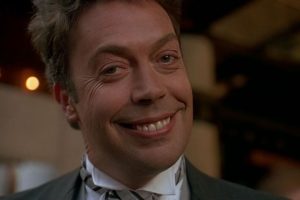 Albeit, different flavors of the sexy, but beautiful either way. This is very important. Yes, sure, Pennywise might be some sort alien-demon-monster-creature, but it leads you to wonder…hey…what’s under all that blood and makeup and sharp-ass teeth?

The character himself has swagger. His presence is powerful, someone you crave to come back after he’s left the scene. He looms over the children, feeds off their fear, and hates them for merely existing. How cool is that? 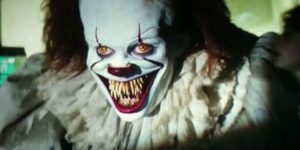 It’s intriguing too, that the character’s favorite form is the clown. And why shouldn’t it be? Those glowing yellow eyes, that knowing smile…really, if those kids were just a little older, say 16-20 we would have a very different narrative. Hell, reports state that in early scripts he was even supposed to shift into Freddy Kruger at one point in the film (because it took place in the 80s).

It’s a good thing he didn’t, because not only would that be a silly choice that pulls you out of the narrative, but you’ll see evidence in our next entry that it would have been sensory overload. Instant orgasms on the spot from all female, queer, and smart audience members. Especially since Beverly isn’t afraid of the clown as-is (you know, since she has that whole molesty-dad problem at home…which really, is way scarier than some sexy-boogy-man).

And because the clown’s sexiness isn’t overtly sexy, but accidentally sexy, there’s a good chance that it represents that delicate divide between childhood ending and adolescence/adulthood beginning. In fact, I recall reading interviews with Stephen King that claim that his sewer-gang-bang scene was supposed to be beautifully symbolic and represent the ending of childhood and the blossoming of adulthood. But really, I think drinking too much tequila, making out with your best friend’s sibling, and passing out upside down in the front yard accomplishes the same thing.

4) Freddy Krueger from A Nightmare on Elm Street 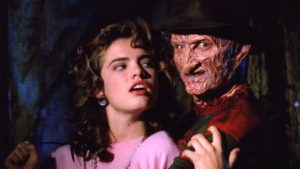 There’s absolutely no denying it: Freddy Krueger is a charismatic sex god.

I’m going to let images speak for themselves. Look at the way Freddy gazes at the camera. Look at the way his female co-stars pose with him, like he’s a member of Twisted Sister or whatever band was hot at the time. Look at the way his face is position between those two blades. What is he suggesting here? That’s right- razor sharp at it may be, he’s ready to slather in some tongue flicking goodness. 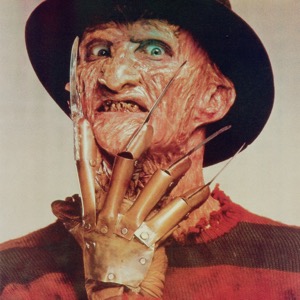 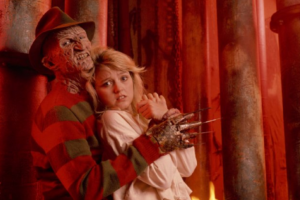 As if the pictures weren’t enough, we all know Freddy is ready to spout some innuendo at any given moment. Remember in the original A Nightmare on Elm Street after he and Nancy have their little phone call? He says “I’m your boyfriend now, Nancy.” And his tongue slips right into the phone. In the same film, when Nancy is taking her bath, we see his gloved hand poke through the water’s surface and between Nancy’s legs. 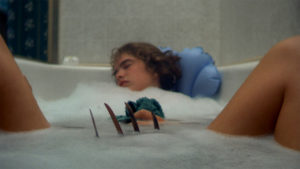 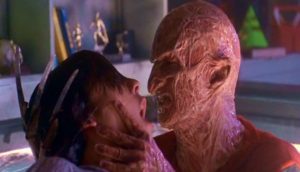 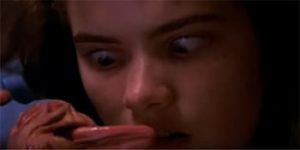 In A Nightmare on Elm Street 4: The Dream Master, Freddy helps himself by crawling into bed, right on top of the protagonist, Alice. Hell, in the 5th movie The Dream Child, the whole point is Alice is pregnant with his demon spawn (all right fine, he just enters the mind of the sleeping, gestating baby, but come on. Semantics.)

Last but not least, and one of my favorite Freddy moments, he tells Lori (the virgin protagonist of Freddy Vs. Jason) “I should warn you, princess… the first time tends to get a little…messy.” 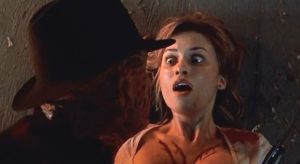 Sure, all right, in context it might all be because Freddy was originally slated to be a child molester. However, that was removed from the source material, opting for a child killer instead. They mention in Freddy Vs. Jason that he especially likes little girls. But from what I can see in the films, Freddy’s ready to take it to the bone-zone with some hot, glorious barely-legal-ladies.

…we’re not building the best case here, are we?…

3) Eric from The Phantom of the Opera 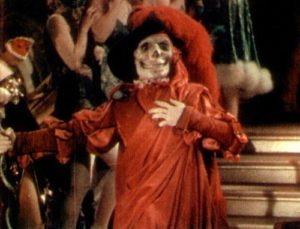 There are those out there who feel that The Phantom of the Opera wouldn’t work in real life because Christine isn’t an idiot. Simply put, any smart, young woman would recognize the signs of dangers and never give in to The Angel of Music’s pull, his dark sensuality, his obsessive romance for the young opera singer.

The Phantom of the Opera is one of the sexiest horror movie villains that’s ever existed. Hands. Freaking. DOWN. In every version of the movie, too! The book was work, sorry. But from Lon Chaney, to Claude Rains, to Michael Crawford, Robert Englund (playing Freddy the Phantom), to Gerard Butler, Ramin Karimloo, to KISS’ Paul Stanley… 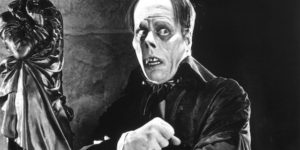 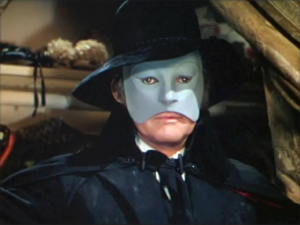 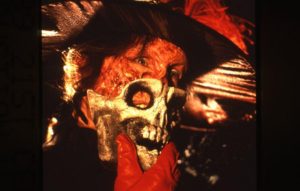 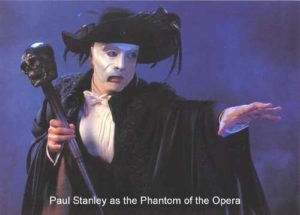 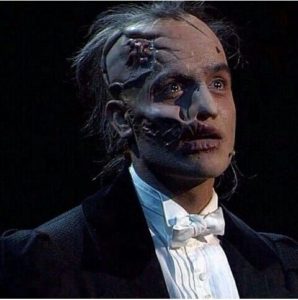 Eric “The Phantom” is HOT.

He comes out of your mirror and he’s in love with you! For fuck’s sake, he’s been watching you. How much has he seen? Not knowing is kind of cool. I mean, you don’t even have to do anything and the romance and magic just comes to you! Isn’t that everyone’s dream?

Sure, okay, he’s a psycho killer and murders stage hands and shit. But like, he keeps you intact. He only threatened to slap Christine once, and it’s because she pulled his mask off. Doesn’t he know he was wearing that thing for a reason? If he wanted her to see his face, he would have pulled the mask off when they dropped down once more into the filthy sewer. Right?

And when that moment finally comes, after that passion pumped song “Point of No Return/Down Once More” when Eric and Christine kiss AT LAST?! What happens then? Exactly: he decides that shit wasn’t so much worth waiting for and he sends her home.

Just kidding, his heart is broken, he loses his only love, and hem escapes the opera house. 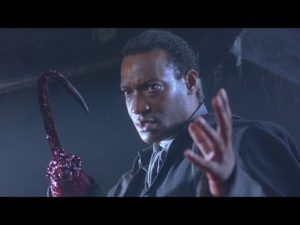 Candyman- does it made an impact. As if the urban setting wasn’t creepy enough, and the whole spin on the good old Bloody Mary story wasn’t Creepsville (say CANDYMAN FIVE TIMES IN THE MIRROR) the movie sure made a whole generation of us afraid of public park restrooms and fucking bees. This movie nailed the scary bees thing long before Nick Cage made that meme of a remake they call The Wicker Man.

But holy mother, the actual Candyman himself was gorgeous. The first time he made an appearance in his trench coat and hook, it was love at first sight. What a sexy man. And some serious bedroom eyes to boot. It almost forgave that whole “slashing people and murdering angle”.

One cool thing about Candyman is toward the end it pulls a fast one on you. It changes the narrative from “crazy urban legend plantation slave’s son creature-man” to a romantic Destined Couple story about a woman who falls in too deep and discovers she is the reincarnation of the murderer’s lost love. It’s beautiful and tragic and it fleshes out the narrative to more than a cosplay-worthy-beautiful-bee-man wrecking faces with his bad-ass hook.

Le sigh…devotion is a beautiful thing.

1) Lestat from Interview with the Vampire 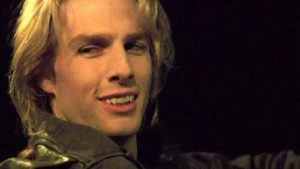 The most memorable thing about Tom Cruise’s original depiction of Lestat from Interview was the amount of praise he got for his acting. But as time went on, it was clear that this is the least amount of acting he’s ever done. Much like Lestat, Tom Cruise is (likely) quite insane. It’s like someone stuck him in front of a set, pointed at Brad Pitt looking his hottest, and said “Hey, just go talk to that dude, okay?” Personally, I’ve never seen the 2001 sequel Queen of the Damned. But from the screen shots and gifs I’ve seen, I’m boggled by how much Stuart Townsend looks like the vampire boy from Twilight. To the point that when they were casting Twilight, the producers said “Hey, people like that Lestat guy, why don’t we get a guy who looks like him to be Edward? No, not Tom Cruise, the newer one. The one who rolls his eyes and sighs. Yeah, like Lestat mixed with some Hayden Christiansen. Oh, Robert Pattinson? Perfect, nailed it.”

Watching the original Interview with the Vampire back in 1994, it was undeniable that Lestat was the one everyone should have been getting all excited for instead of Louis. There was a cool arrogance about him, his carefree laughing at people’s anger that resonated with me. And of course, when it came down to it, he was a murderer. And in spite of giving Louis “The choice he never had”, Lestat seemed pretty down on that vampire life. And collecting hot dudes life. And trapping them into that parenting life.

Hmmm…on second thought, dude had some gnarly issues. Maybe we should recast our #1 spot. Perhaps so. Sexy, sexy…horror movie villain who is sexy….

How about that Beetlejuice guy?