5 Cock-Rock Album Covers That Will Make You Cringe

1) The Scorpions Can’t Get Out of Creep-Mode

It almost goes without saying that Scorpions is one of the greatest rock bands of all time. With hits like “Rock You Like a Hurricane”, “No One Like You”, “Big City Nights”, and “Winds of Change” the band is a rock and roll staple with a distinct and unforgettable sound.

Then why can’t they keep the cringe away from their album covers?

Their first controversy came almost 40 years ago on their album Virgin Killer, where a nude image of a ten-year-old girl with obstructed genitalia graced the cover. The album was pulled from shelves and replaced with a less creepy band photo.

And while our buddies over at Cracked already slammed the Lovedrive album cover for the bubblegum boob it’s a shame that the Animal Magnetism cover was left out. Because it’s unsettling even before you notice there’s a dog next to the woman. 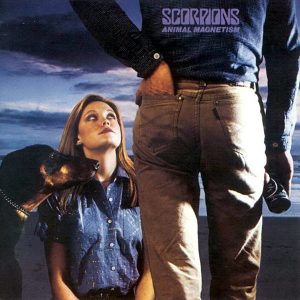 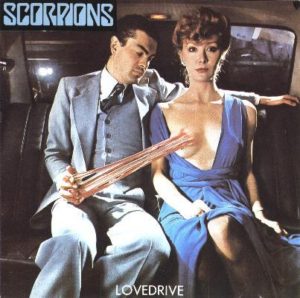 These problems with The Scorpions’ cover art aren’t just problems created in the 1980s. They were causing trouble right up until last year when their 2017 album was dropped with the less-than-subtle name Born to Touch Your Feelings.

Below is Poison’s Open Up and Say Ahhh cover art.

The picture just looks like the bassist’s sister needed to get in on the action and daddy was the music producer who said if his little girl wasn’t allowed on the cover, then Poison would never play another gig in this town again.

Oh, and then do an impression of Gene Simmons meets Lion-O for that ultimate touch-guy edge.

This album cover isn’t so upsetting in and of itself. Until you factor in the fear that Poison is the most unmetal band ever. Really, their sound boarders harder on Rockabilly and Bret Michaels totally dressed the part too. That aside, look at this cover. Does it remind you of anything? It reminds me of something. Maybe some demon creature from Scary Stories to Tell in the Dark?

3) Van Halen Takes the Wasteland to an Uncomfortable Place

Van Halen is awesome. Half legit band, half self-proclaimed sex symbol, David Lee Roth was the coolest front man short of a rock and roll clown. The band left their impact, musically and aesthetically. And after looking at a picture of young Van Halen and realized that David Lee Roth looks suspiciously like Elaine Carroll of the old Very Mary Kate sketches it only made the band even cooler.

But then…there’s the artwork for Balance. Aside from the abandoned wasteland behind the two (unnecessarily naked) girls, conjoined twins or not, there’s nothing less metal than children on an album cover.

One of the best things about WASP, aside from their amazing music is front man/bassist Blackie Lawless’ unshakable confidence. That dude walks into a room, sets himself up in front of that camera, and he’s ready for everyone in the room to want to have their way with him. Cabbage Patch Kid face, Codpiece, and all. Just look at the cover for the incredible album The Last Command. Look at this man’s face. He’s phenomenal.

But to the untrained eye, one might see the covers for Electric Circus and the single for Animal (F**k Like A Beast) and think there’s a severe or violent problem here.

All right, the bloody crotch might be a little more than we needed.

5) Whitesnake Vs. Their Cover Art for Ultimate Creep Status

You remember Whitesnake. These guys on the wrong side of 40 with their flashy jackets and teased, layered hair. Although there’s no scientific evidence to prove it, these guys were really the nail on the coffin of that cock-rock genre. You remember their hit song “Here I Go Again”. Bet it’s the only Whitesnake song you know.

It featured this gorgeous woman:

Pretending she had to be into this guy:

Not a good scenario for anybody. That said, the album cover for Lovehunter is way cooler than any song Whitesnake has ever written.

You go ahead and tell me that snake’s mouth isn’t playing a less-than-subtle game of Peekaboo Pussy.