Disney’s theatrical film, Moana, a gorgeous story about a “regular girl” who totally wasn’t an ocean spirit or goddess in disguise was beautifully constructed. It had balance, a lovely design, and if you’re feeling generous, you could even say it was perfect. Just like all the other animated films that came before it that it seemingly lifted from. In other words, it seems that Moana may have borrowed/gleaned inspiration/flat out copied scenes.

Today on PopLurker, we’re piecing together the puzzle and bringing you scenes from other cartoons that are just too close to those from Moana. Do you think Disney artists copied from these sources? Let us know in the comments!

Both Moana and Zootopia start with a prologue, and a character describing (in the form of a play) what life was like for their people in distant generations. In Zootopia, it’s young Judy Hopps telling an audience of onlookers about predators hunting prey. In Moana, it’s Grandma telling the story of the island Te’Fiti getting her heart stolen by the demi-god Maui. Both stories end with a grand proclamation of “Blood, blood, blood, and death” (or inescapable death, which are the literal words in Moana). The camera in Zootopia pans to Judy’s horrified parents, and the camera in Moana pans to terrified babies. 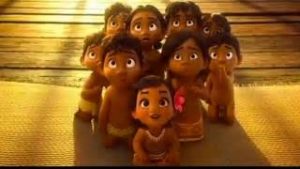 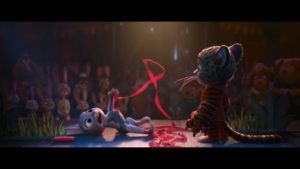 Baby Moana then leaves the hut where Grandma was telling her terror tales to babies, and heads over to the ocean, unsupervised, where she has a “Diamond-in-the-Rough-Chosen-One” moment, where the audience learns that she’s going to make the world a better place one day. Moana’s father sees his baby alone in the ocean, scoops her up, and that’s when the movie starts getting all…

the first songs in Moana and Pocahontas (minus the one about the English dudes sailing to Virginia) about the native people of the land singing their praises about the crops of the earth? Check out these lyrics.

Pocahontas: Steady as the Beating Drum

Steady as the beating drum

Singing to the cedar flute

Bring the corn and bear the fruit

By the waters sweet and clean

Where the mighty sturgeon lives

Plant the squash and reap the bean

All the earth, our mother, gives

Help us keep the ancient ways

Moana: Where You Are

There comes a day

When you’re gonna look around

And realize happiness is where you are

We use each part of the coconut, that’s all we need

We make our nets from the fibers

The water’s sweet inside

We use the leaves to build fires

We cook up the meat inside

Consider the coconuts The trunks and the leaves

The island gives us what we need 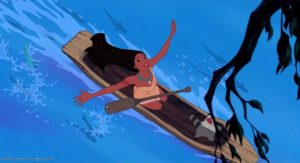 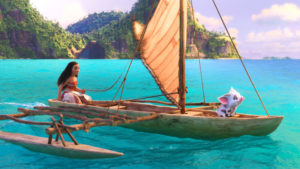 Each movie continues: free-spirited Pocahontas (daughter of a chief) laments that her father wants her to be steady like the river. She jumps into a canoe and ponders her way into a song called Just Around the Riverbend where she wonders if there’s more out there than her predetermined destiny of marrying a big, strong, beefy-dude.

Meanwhile, Moana (daughter of a chief) has her own song called How Far I’ll Go  where she hops on a canoe and kvetches her way into wondering if there’s more out there than her predetermined destiny of taking over as chief…where she gets to be the leader of a bunch of big, serious, beefy-dudes. 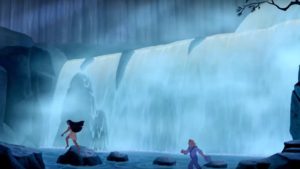 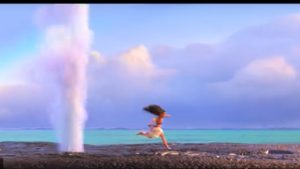 There’s even more crossover between these two movies, and it goes further than the ladies leaping delicately across rocks and geysers. 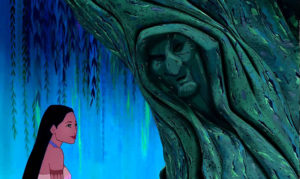 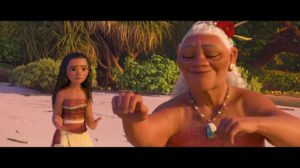 And going back to his mother, A grandmotherly figure guides both protagonists through their films, although Moana’s is a literal Grandma and Pocahontas’ is a tree spirit of a very old willow tree. Both Pocahontas and Moana are presented with necklaces, which they wear for the duration of their respective films. Pocahontas’ belong to her deceased mother, and Moana gets hers from her Grandmother while she’s on her deathbed. 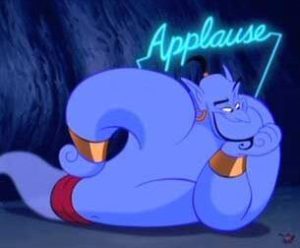 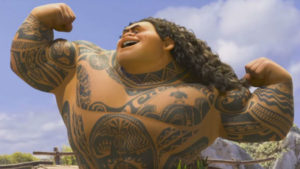 Our diamond-in-the-rough Moana, and her chicken companion Heihei begin their oceanic journey. They face a storm, miraculously land on an island, and meet Maui- a lumbering funny dude with magic powers, though his powers are MIA until he’s able to get back his magical fish hook. And upon meeting the fabled demi-god shapeshifting hero of men and women, the audience learns something fun- Maui is a big old goof. In fact, in many ways, he reminded me of the Genie from Aladdin.

Let’s start by examining the physical similarities between Maui and the Genie. Both are big, lumbering magic men. The Genie uses his powers to transform into all sorts of things, whatever celebrity impression or object suits the momentary joke or narrative. Maui has a similar ability; Both take the poofing-combo approach (technical term for transforming into a string of creatures), and turn into trendy Disney characters at one point. Remember when the Genie summons Sebastian from a cook book, and turns into Pinocchio to call out Aladdin’s lie? Maui, when trying to turn into a giant hawk, becomes Sven from Frozen.

Both the Genie and Maui are complementary foils to their counterparts. Aladdin is self-deprecating so the Genie boosts him up, takes on an almost paternal figure, and bonds with the monkey. Moana is blindly confident in herself and mission, so Maui spends the first half of the movie telling her she can’t sail, she’s a dumb kid, the kakamora (you know, the little coconut pirates that look like the Shy Guys from Mario) are going to kill her, he’s going to eat her chicken, etc.

But similarly, once freed the Genie sings Friend like Me to Aladdin, a song that presents reasons to Aladdin why the Genie is so useful to him. Then in keeping-it-copied fashion, when Moana finds demi-god Maui he promptly sings a song called You’re Welcome,  which again…tells Moana how useful he is. 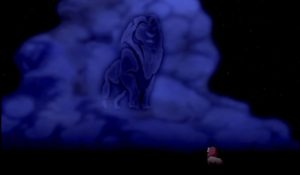 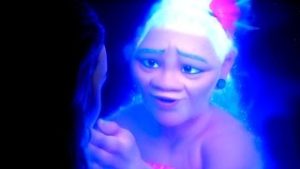 About 2/3 into both films, our protagonists start feeling like losers that can’t complete their missions. That’s when Rafiki takes Simba out to a clearing where the ghost of his father, Mufasa, comes to give him an Obi-Wan in the forest pep talk. Moana on the other hand, gets a visit from her grandma, who boards the boat to tell her that she’s still awesome and needs to just keep practicing. Sure, we only have one Lion King moment in this film versus the multiple examples from other movies. But the scene where Mufasa’s ghost appears in the sky and talks to Simba is so important and impactful, it makes it difficult not to associate the Grandmother Ghost portion of Moana to that in Lion King. 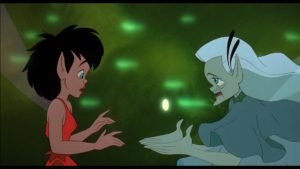 For the sake of time, I’m going to break the remaining movies down a little quicker. But did anyone else see the clear tie-ins between Moana and Ferngully: The Last Rainforest? Let’s check it out.

First, we have Moana and Krysta, both Chosen Ones sent on missions to save their people by an older, more powerful Mentor. For Moana, it’s Grandma. For Crysta, it’s the ancient high-fairy, Magi Loon. 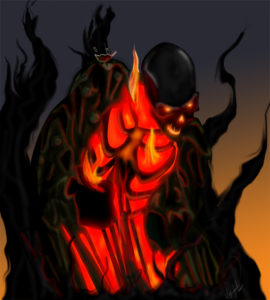 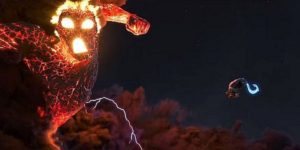 Characterizing nature is the driving force that rids the villain from the inside out. In both movies, a big scary lava-monster has a piece of nature stuck in it and nature is the force that heals them. Granted, Te’Ka became ashen when her heart was stolen, while Hexxus from Ferngully is sealed when a fertile seed causes a tree to grow around him. 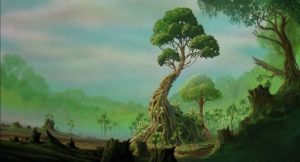 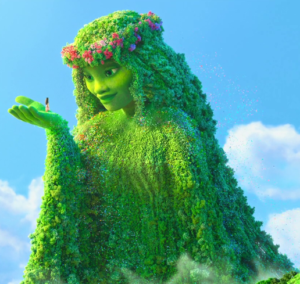 But once he is gone, the earth begins to heal and the imagery is quite similar to Te’Fiti healing the lands in Moana. So basically, the whole ending.

There are some similarities between The Greedy and the Sparkle Crab, Tamatoa. Both live in pits. Neither can ever get enough, and sing about it. Both are after a heart, though the Greedy wants a “sweetheart” and thinks Raggedy Ann’s candy heart will do. The Crab wants new treasure and wants to take the sparkly Heart of Te’fiti after discovering Moana has it. 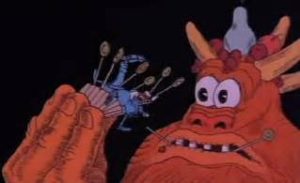 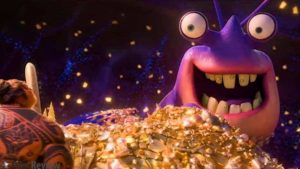 After each learn of the heart-like possession, they try to eat Raggedy Ann and Moana, respectively. And both the Greedy and Sparkle-Crab get never get enough of their respective vice. 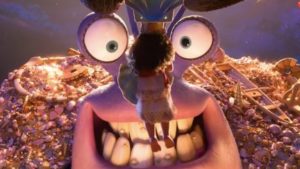 You can give me candy, cotton candy, chocolate bar or lollipop.

Fill me up on ice cream, dripping fudge sauce, butterscotch and nuts that never stop!

Feed me gobs and gushes of your most de-luscious stuff,

But without a sweetheart, I never get enough.

Yet I have to give you credit for my start

And your tattoos on the outside

For just like you I made myself a work of art I’ll never hide; I can’t, I’m too

Watch me dazzle like a diamond in the rough

Strut my stuff; my stuff is so

Send your armies but they’ll never be enough

My shell’s too tough 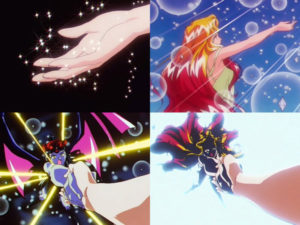 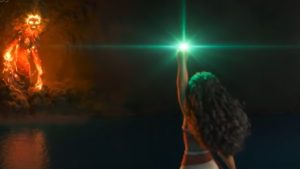 And at last, our most honorable of heroic mentions goes to the scene where Moana goes full Sailor Moon by healing our villain with love instead of destroying her. In fact, the moment when she gives Te’Ka a loving hand and the light breaks through the monster reminded me much of the moment when Sailor Moon takes Sailor Galaxia’s hand and frees her from the evil Chaos in her body. 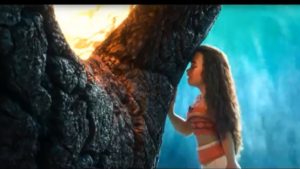 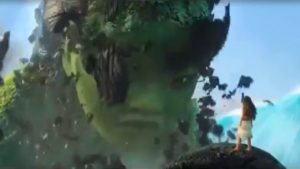 What other cartoon scenes or tropes do you see on loop? Let’s get the conversation started in the comments and tell Nerdbot who copied who!