When the opening sequence of Disney’s new Muppet Babies 2018 reboot dropped on YouTube this year, it got my brain churning. As a kid, I watched more Muppet Babies than I need to admit. To this day, the legendary Piggy Dough-Girl is not only one of my heroes, but an all-powerful figure I admittedly wanted to be.

She’s beautiful. But ultimately, it doesn’t matter what Disney does with Muppet Babies. Because that’s exactly who it’s for; babies. But what about the other show out there? You know…the ones that were resurrected…as total garbage.

Opinions and feelings seemed to be mixed when it comes to Nickelodeon’s flagship NickToon Doug. A simple, unpretentious slice-of-life show, Doug had a slow pace, quirky, memorable characters with varying unrealistic skin colors (hey man, cool by me), a memorable soundtrack composed primarily of acapella mouth noises, and gave kids my age all a reason to start Bangin’ on a Trash Can.

One of my favorite things about Doug at the end of its run was that the show actually ended. It had a series finale. Doug and his friends graduated sixth grade, and Jr. High was just around the corner. Granted, sure, there was plenty to say about these characters, come on. That’s what shit like fan fiction is for. So when my family moved to Israel in 1994 and came back in 1997 just to find that Doug had gotten a revival after only being off the air about two years. Too quick for Nostalgia but too long to catch the wave. Even more interesting that the revival was produced by Disney for their new Saturday morning lineup.

And the results just weren’t so good.

I get it; voice actors and contracts are a funny business. Billy West didn’t reprise his role as Doug. It happens. But that’s the tip of the ice cream cake here. Beginning with costume design and ending with Doug’s new sibling, Connie’s weight loss, The BEETS breaking up, and Roger’s new “rich-kid” status, this show was a slap in the face to its predecessor.

It shouldn’t have. It ended.

That said, the show should have shifted focus to Skeeter or something. In a perfect narrative, they would have aged up to about fifteen years old and we could have seen all those really juicy “firsts” for them, but again- fan fiction. Plus, the show was purchased by Disney in the “everything is okay and conflict doesn’t exist” late 90s. So all right- we can’t get too extreme here. But that’s why shifting focus might have had less fan-rage. You can’t just throw a Winamp skin over a corpse and convince me it’s my old friend. How about a show from Patty’s perspective? Viewers know Doug inside and out. We’ve been in his head, seen his art, nose zits, Durango Doug and Quail Boy fantasies. Pass that torch, man.

Since we’re on the topic of Nickelodeon and flagship cartoons, no article would be complete without talking about one of the best cartoons in animated history, Ren and Stimpy. From the style and art direction, to incredible drawings, to bizarre and gross out humor, Ren and Stimpy was seriously a one-of-a-kind show. It arguably was the strongest of all the Nicktoons, even though audiences seemed to enjoy those easily digestible Rugrats that was on the air way too long.

In a society where Beavis and Butthead was for your teen sibling, Ren and Stimpy was what kids were cutting their teeth on. This show was perfect. Everyone at school was quoting it, singing the Log and Happy, Happy, Joy, Joy songs, and trying to smash their heads with hammers.

It was a great time in American culture.

The most noticeable shift in the show after creator John K. was fired was probably the season three episode “Ren’s Pecs” where Ren became a buff celebrity because Stimpy sacrificed his money to pay for cosmetic surgery. But years later when Ren and Stimpy’s Adult Party Cartoon aired on Spike TV, it was completely run by John K. And guess what.

It felt completely off. 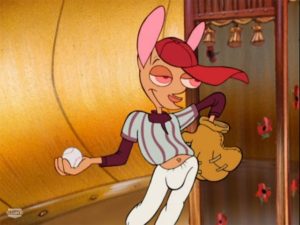 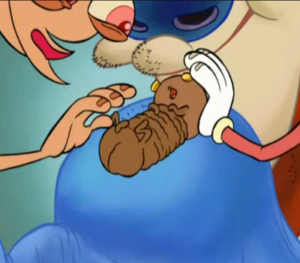 Ren and Stimpy’s Adult Party Cartoon just reeked of John K. on a mad tear going “Screw you, here’s some awesome boobs! Go to hell, have a piece of poo-poo shaped like a wiener! TRY TO CENSOR ME, NICKELODEON!?! WELL, FORGET YOU, I’M ON SPIKE TV NOW! HERE’S REN GETTIN’ COOL ON A LADY!” 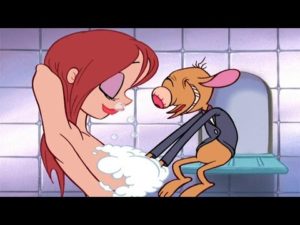 That may or not be an actual quote, I’m not sure. 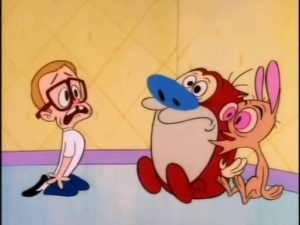 Show me one episode of Ren and Stimpy’s Adult Party Cartoon that’s even a quarter as disturbing as that episode “A Visit to Anthony” and then we’ll talk. Seriously, I don’t think any episode of any cartoon upset me more than that one did. The “biggest fan” who kept hyperventilating and his angry, violent Dad kept beating on Ren and Stimpy? I never wanted to go to another sleepover again. Keep your soapy girly “edgy” girly tits and Ren’s Bowie-bulge, because really…that episode is how disturbing is done.

Sailor Moon has a long, long lineage that’s filled with media outside of the principle anime from the 90s. Aside from being originally based on a manga, Sailor Moon has video games, movies, stage musicals, a live actions TV series, and more toys and merchandise than anyone could ever attempt to collect. But even so, when Toei Japan announced a new series was coming, the world collectively freakoutscreamed. Questions were asked, who will voice the characters? Will Sailor Moon and Tuxedo Mask actually act like a couple? Are any original voice actors returning? What story arc will they cover? Will the story be closer to the manga?

It may have taken a few years for the new series Sailor Moon Crystal to show up, but it came. And it (depending on who you ask) just wasn’t so good. If by “closer to the manga” you mean under developed, rushed plotlines with zero character development, then yeah, it’s closer to the manga. And yes, while Sailor Moon and Tuxedo Mask’s relationship does finally make more sense, it’s at the sacrifice of all of her friends, Sailor Mercury, Mars, Jupiter, and Venus who are lifeless, bland, and only teetering on one-dimensional. The series banks too hard on you already knowing the characters, therefore taking liberties by chopping the characters up.

Let’s stop resurrecting the show with that forsaken Dark Kingdom arc. Give us a new lineup of villains. Every single retelling (live action, musicals, etc.) pulls us into a warp pipe we never asked to be stuffed into and just starts us over from the beginning. If Toei is banking on us following Crystal because we already have a vague idea of what’s going on, then understand that we know the Dark Kingdom arc backward and forward. What happened after Sailor Stars? Hell, what happened in the slip of time between the Silver Millennium and present day? Literally nothing? What was Sailor Cosmos doing? What were the Sailor Starlights doing on their planet Kinmoku? I doubt I’m speaking only for myself when I say that these are the stories I’m ready for! Show us Sailor Moon’s second daughter, Kousagi, and her bunny-eared pigtails.

He-Man is the best. If for nothing else, Skeletor’s shouting and He-Man’s laughing animation.

Now, it’s anecdote time. I know a gentleman, now in his 50s. One of his earlier jobs in the 80s was working on the She-Ra, Princess of Power cartoon. One of the ways he and his team saved money and time was by creating new episodes of the show using as many preexisting shots as possible. He claimed that their goal was 80% reuse, 20% original animation. Apparently, if you could make an entire episode of the show with 100% reused animation, which they did sometimes, you were considered a pretty cool dude.

All I’m saying is that the show was by no means perfect. But you know what it was? It was charming. It was exciting. And you know what? Skeletor was funny. But because it was so flawed with its wonky animation, ridiculous music, and hokey humor, it’s no surprise this show was rebooted.

I think the most charming thing about He-Man was the titular character himself. He was just so innocently clueless, a total wimp. He seriously just looked like a bewildered muscular man-baby, like he didn’t understand how he won the starring role in his own show. Later versions would have this kind of young, cool dude version of He-Man. I can only speak for myself, but those “cool dude” characters like Captain N and Link (from the TV show) just don’t do anything for me. But He-Man is so great because the show is telling me he’s some chosen one, and it’s telling me he’s all beefy and ready to rumble…but then he’s just wimpy and surprised all the time. That’s where the charm is. Skeletor screaming like a buffoon calling everyone a boob all the time, randomly turning good when the episodes need him to? That’s the charm.

You can see clips of the newer versions here and here. They’re not bad cartoons, they just don’t work. Hardcore fans might disagree, and that’s fine. Please, school us. But my stance remains the same as it did in Sailor Moon. Gonna give me a reboot? Give me a hero I recognize. And give me new villains. Don’t reboot them. And if you do…

Rainbow Brite is fascinating. It was a strange, almost-magical-girl-sort-of-superhero-but-too-DIC-and-goony-for-that slice of cartoon history. What was originally a line of greeting cards from Hallmark spawned into a toy line (because duh, 80s), excellent straight to video cartoon, an incredible feature film, and a less than stellar televised second season of the same cartoon that we were still grateful to have.

For a long time, Rainbow Brite disappeared into obscurity, barely making it into the 90s. There was a brief toy line return back in 1996 when new Rainbow Brite dolls came out, but I wouldn’t have even recognized these things if I saw them sitting on a toy store shelf. Another new line of dolls dropped around 2009, which were cute, but definitely more in the vain of Bratz and other teenage fashion dolls with attitude.

But then in 2014, this shit heap trailer dropped. For long-time fans, it was like seeing your old summer camp friend, running up to her for a hug, just to have her knee-punch you in the throat.

Was this web-toon a joke? It’s like an Ebaum’s World flash cartoon joke. Hell, Robot Chicken and The Soup with Joel McHale had more loyal parodies!

I don’t even know anymore. I’m tired and I feel like a need some rum or at least a milkshake. I can’t keep saving the world and rewriting the world’s cartoons. But yo, if anyone at Netflix happens to read this article and wants to reboot any of these shows again?

I can have a script on your desk by Tuesday.

If you want to yell at Loryn for ruining your childhood, you can follow her on Twitter!