I’ve written previously about 4 beloved game or cartoon franchises getting the feature film treatment, only for us fans to be fooled into thinking we were getting something great and amazing, but then we’re all given a good gut punch when we sat down and watched the film in front of us.

This time around we’re going to look at 5 more adaptations that were a total bummer. 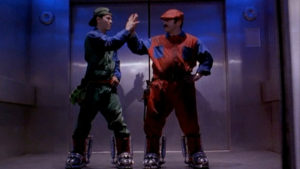 How can you mess up Mario?

I can almost imagine the board meeting at the time.

“What’s that video game the kids are all crazy about? Pong, right?”

“No, sir. Super Mario is what’s cool with the kids. There’s dinosaurs in it too, I think, and dinosaurs are becoming the rage this year”.

“Perfect! The kids will eat it up, and we’ll all buy ivory back scratchers with the millions we’re sure to make!”

1993 would have its share of dinosaurs from Jurassic Park to We’re Back to this…thing. This whole movie was a mess, and that’s not including the fungus we’re told to trust throughout the film. Koopas are these lumbering, oafish, shrunken headed bipedal dinosaurs. Dennis Hopper seems to be sleepwalking through his role as King Koopa, and while Super Mario weren’t 100mph shoot ‘em up style video games, they still had more action than this film has.

Lance Henriksen is figuratively crapped out at the end of the film for a 5 second cameo as the King and was slated to have a larger role in the sequel that thankfully never came to light. I will give the filmmakers some credit for at least giving Luigi some long overdue shine, and the Bob-omb bit is cute.

Poor Bob Hoskins, though. Near the end of the film, when Koopa and Mario are merging between the two dimensions and their bodies are disintegrating as they’re merging, if that image isn’t a metaphor for Bob Hoskins soul leaving his body upon realizing what he had signed himself up for, I don’t know what is. 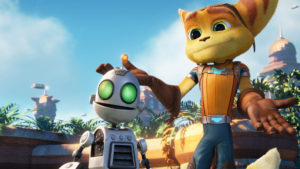 Here’s another example of a film either completely ignoring the source material of the video game it’s inspired by or taking a whole lot of creative liberties with said material.

Ratchet and Clank shouldn’t even be called that because the two characters hardly interact with each other throughout the course of the movie. If you’re going to make a movie about a video game tandem, they should…you know…be a tandem. At least Super Mario Bros. had Mario and Luigi working together for much of the movie, whereas Ratchet and Clank are more like two roommates who work opposite shifts and occasionally bump into each other as one is leaving for work and the other is returning home.

Don’t touch the leftover chicken in the fridge, Clank!

There’s also a lot of bait and switch in this movie. Recognizable weapons from the game are seen briefly and introduced, only to be promptly tossed aside and forgotten about, most notably the Ryno, as if to say to the fans, “recognize these cool weapons from the game? You do?! Sweet, too bad none of it means anything”.

There’s a running story about the villain Drek wanting to build a perfect planet, yet instead of terraforming any of the uninhabited planets he comes across, they get destroyed instead. Sure, most villains do evil things and have no chill, but the best ones have at least a shred of common sense.

Sticking to the video games after watching this movie is also common sense. 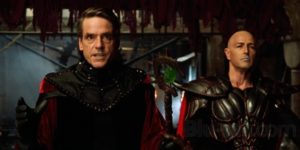 What a waste of Jeremy Irons.

How epic could this film be? Would it be a fantastical sword and sorcery masterpiece?

The answer is hell and no.

With all the cash they had on hand, you’d think Wizards of the Coast would turn in a huge, sweeping blockbuster of a film suitable of the Dungeons and Dragons moniker. But, instead of rolling a critical hit, they rolled a critical miss with a film that was given a tiny budget to work with, was based off an older script that the producer didn’t want to use and is boring, listless and full of excuses as to why it didn’t work and how it could’ve been better.

There’s honestly no excuse for why anyone should want to watch this. 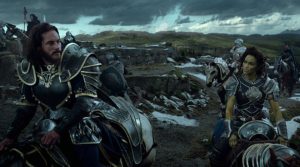 Where do I begin with Warcraft other than to say at the 2/3rd mark of the film I grew so bored I paused the Blu-ray to go do dishes and switch my laundry.

Hmm, I could mention how early in the film there’s a short-range pistol like weapon referred to as the Boomstick which was also in the game, however hearing Boomstick made me look at the DVDs on my bookshelf and contemplate watching Army of Darkness instead.

Perhaps I can talk about how the first battle scene between the humans and the orcs includes three Wilhelm screams. The Wilhelm scream is iconic and all, but three in the same scene?

These are the things I’m paying attention to, people. Not the story they were attempting to tell in this film, because as the viewer goes through this movie scene by scene and if they’re paying attention and not clamoring for Bruce Campbell or dishwashing, they’ll realize that if whatever happens could potentially mean something it doesn’t matter because it’s on to the next scene and what we just saw isn’t given time to develop and be absorbed by the audience.

There are far too many characters jockeying for position, but none of them really have anything worthwhile to say and while ILM had a hand in the CGI of the film, and it looks nice visually, Warcraft is all sizzle and no steak. 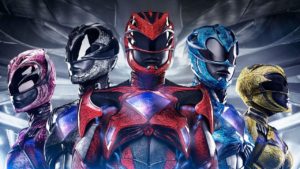 Unfortunately, 2017’s Power Rangers morphed into a complete disappointment and tops our list.

I have one simple question for everyone involved in this film.

Why do you hate fun?

I didn’t watch a lot of MMPR back in the 90’s, and truth be told I am nowhere near as deep into the fandom as some of the other Nerdbot writers are. However, I did watch enough MMPR on Fox Kids to remember one undeniable aspect of the show.

It was colorful, it was goofy, it was over the top and again, it was fun. This film forgoes any sense of fun for “gritty”. I’ve been sick of gritty reboots since they first became a thing, and so many times throughout Power Rangers my eyes rolled so far in the back of my head I thought they would be stuck that way.

Slow-motion goes on my list as well of things I can do without in a film. When the Rangers finally get their armor and march in to model for Zordon presumably, my guess is the studio were going for epic, but it felt more like an over dramatized wankfest to me.

There’s no large, grandiose opening title screen, just the actor who played Billy in Stranger Things 2 crashing his car and then a meek little Power Rangers title appears in the bottom right corner of the screen as if the filmmakers were hoping we wouldn’t notice what movie we were watching.

Searching the internet, I read that audience members gave this movie an A? A for what, awful? Were these audience members drugged? Bribed? Had the dogs released on them, or the bees or the dogs with bees in their mouths and when they barked they shot bees at them to get them to give this piece of crap an A?

After 90 minutes of this 2-hour dreck; but what really felt like 90 years, the Rangers fight some Putties and get their Zords, and I barely had the energy to care by this point.

They square off with Goldar (taking the Gold in his name and turning that sucker up to 11) in an uninspired fight sequence until; like Milhouse wondering when Itchy and Scratchy are going to get to the fireworks factory, might we finally be so lucky that we’ll get to see the Megazord?

Uh yeah…sort of. Except, instead of getting the badass “Megazord sequence has been initiated. Megazord activated”, these clowns completely fall ass backwards into forming the Megazord and the whole thing is brushed off as a fluke.

Kind of like how it was a fluke this movie made any money at all.