Well I’ll be. Looks like Labyrinth is getting the comic book treatment.

Personally, whether the results of any comic book adaptation (or continuation, or reboot, or whatever), I always appreciate them more than a television or movie remake. You can’t capture the magic of the original in the same way. Fans aren’t happy. Actors have passed away. Some things are just products of their time. Everyone is miserable.

But with comic book canon, you have a little bit of wiggle room.

Labyrinth is one of those movies that I’ve always felt is…disjointed. I’m sure that even hardcore fans of the film can see where I’m coming from. I wrote an article for Cracked.com once where I discussed Labyrinth among a few other female-driven fantasy films that would fall apart in reality. While I argued that there’s no plot here because Sarah would see Jareth, throw him on her parents’ bed, and ride that Bowie-Bulge highway right to the Dangerzone, my editors at the time urged me to be a little less of a…creep.

Ultimately, my argument was this: for a girl so angry and mean spirited, she sure has no trouble going “All right feet, let’s hit it” once Jareth informs her of her mission and objective. Wherever the writers of this comic book choose to go in this narrative, my feelings are that the number one thing that needs fixing is Sarah, the character. Flesh her out and make her someone the reader wants to see win and succeed. 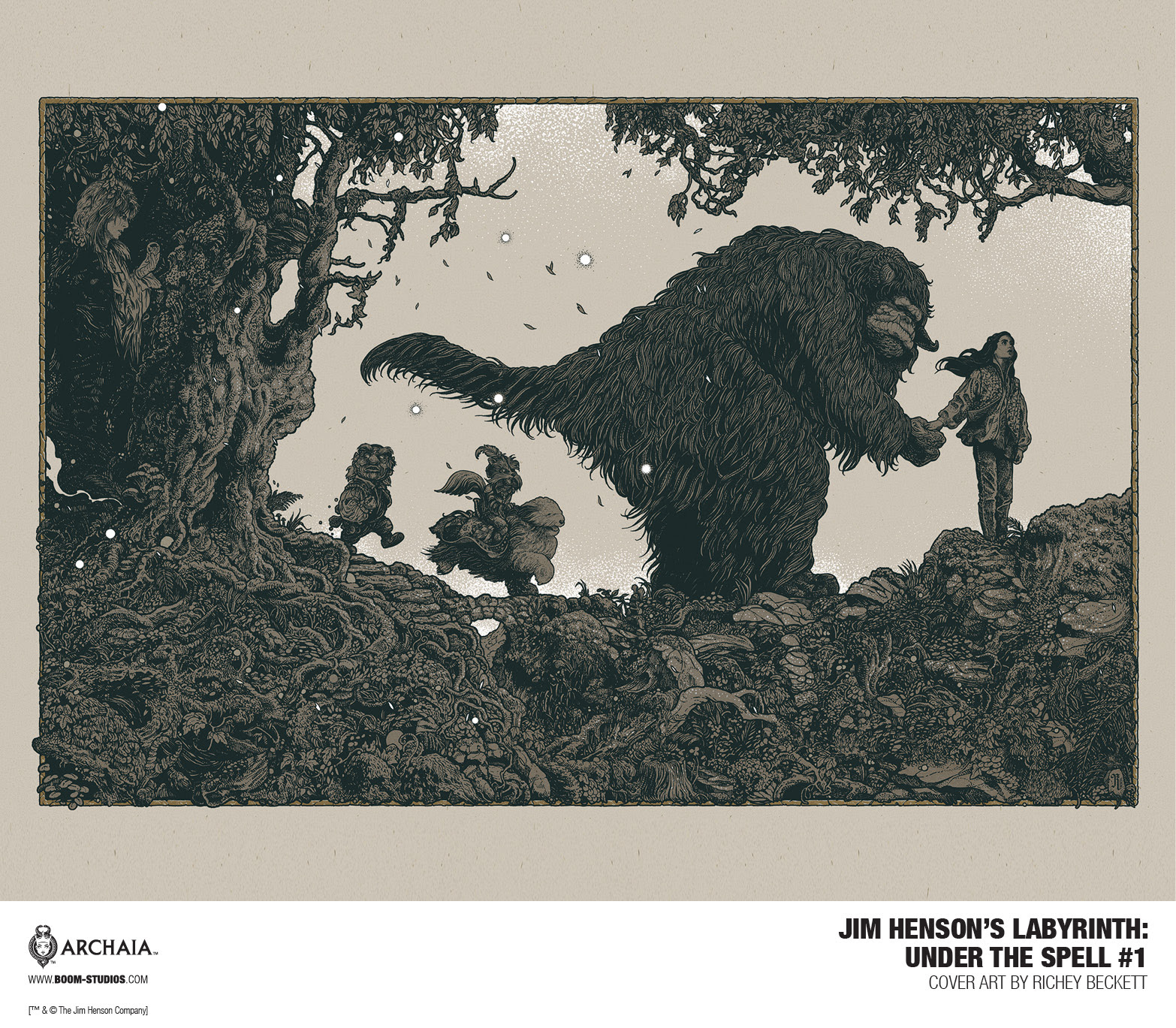 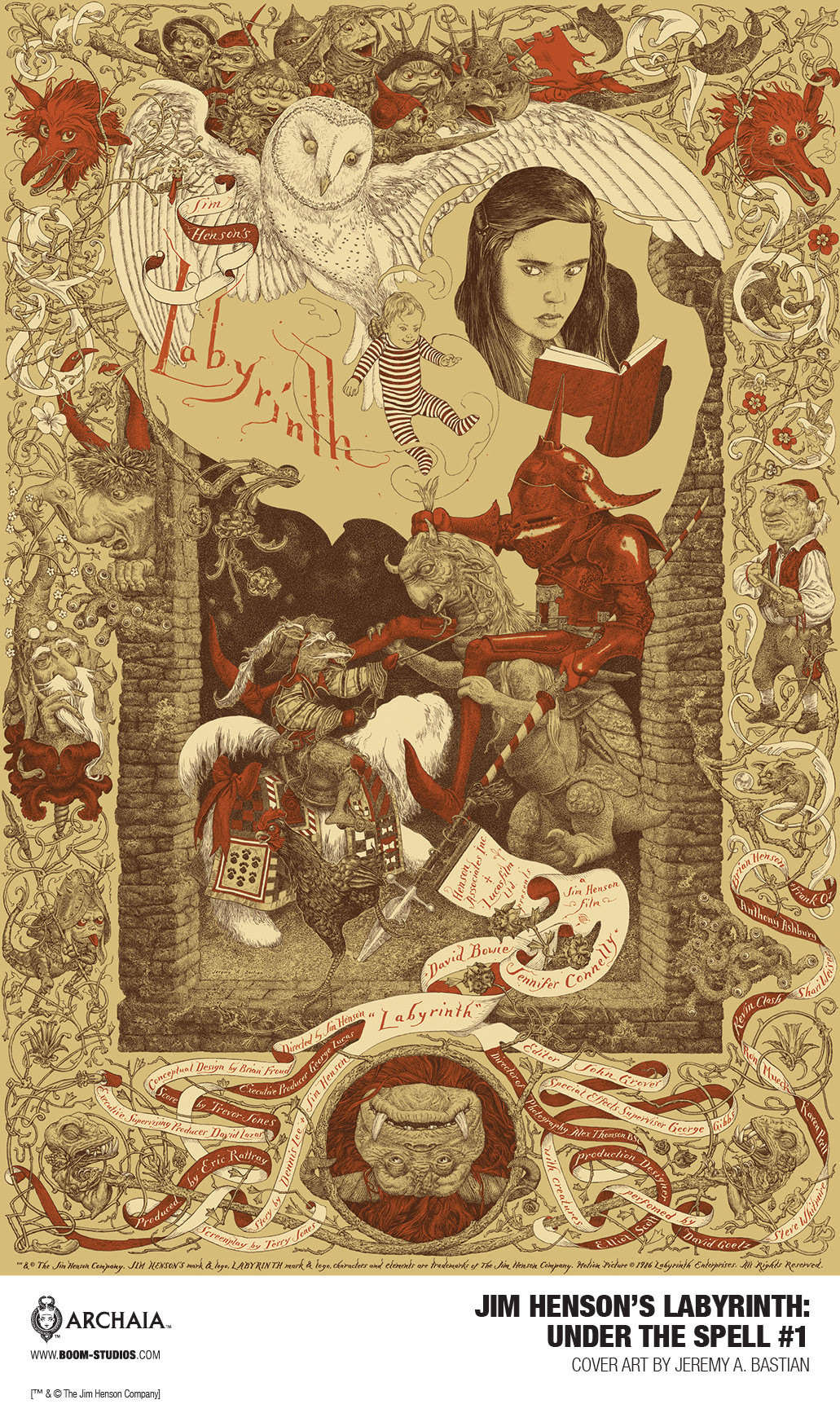 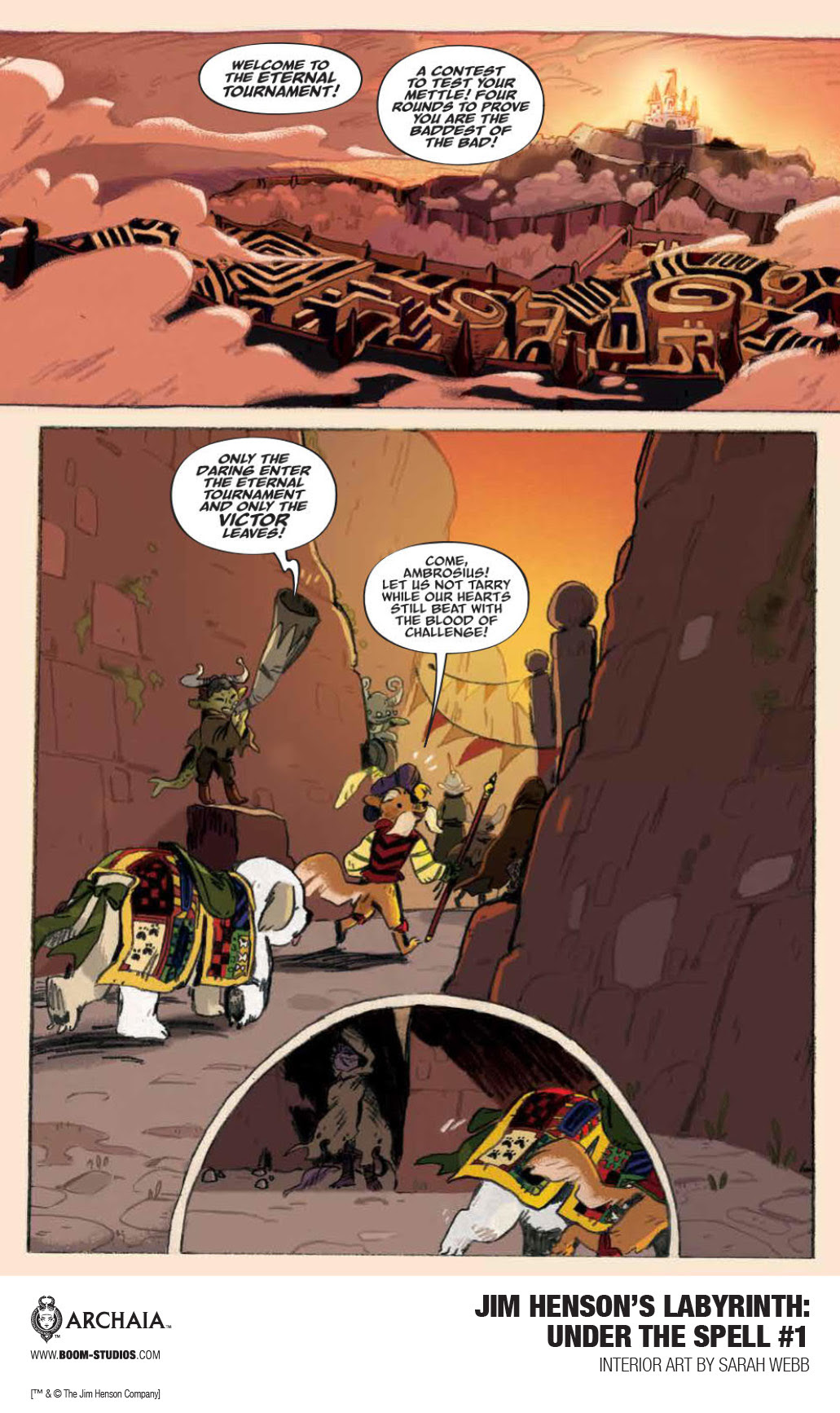 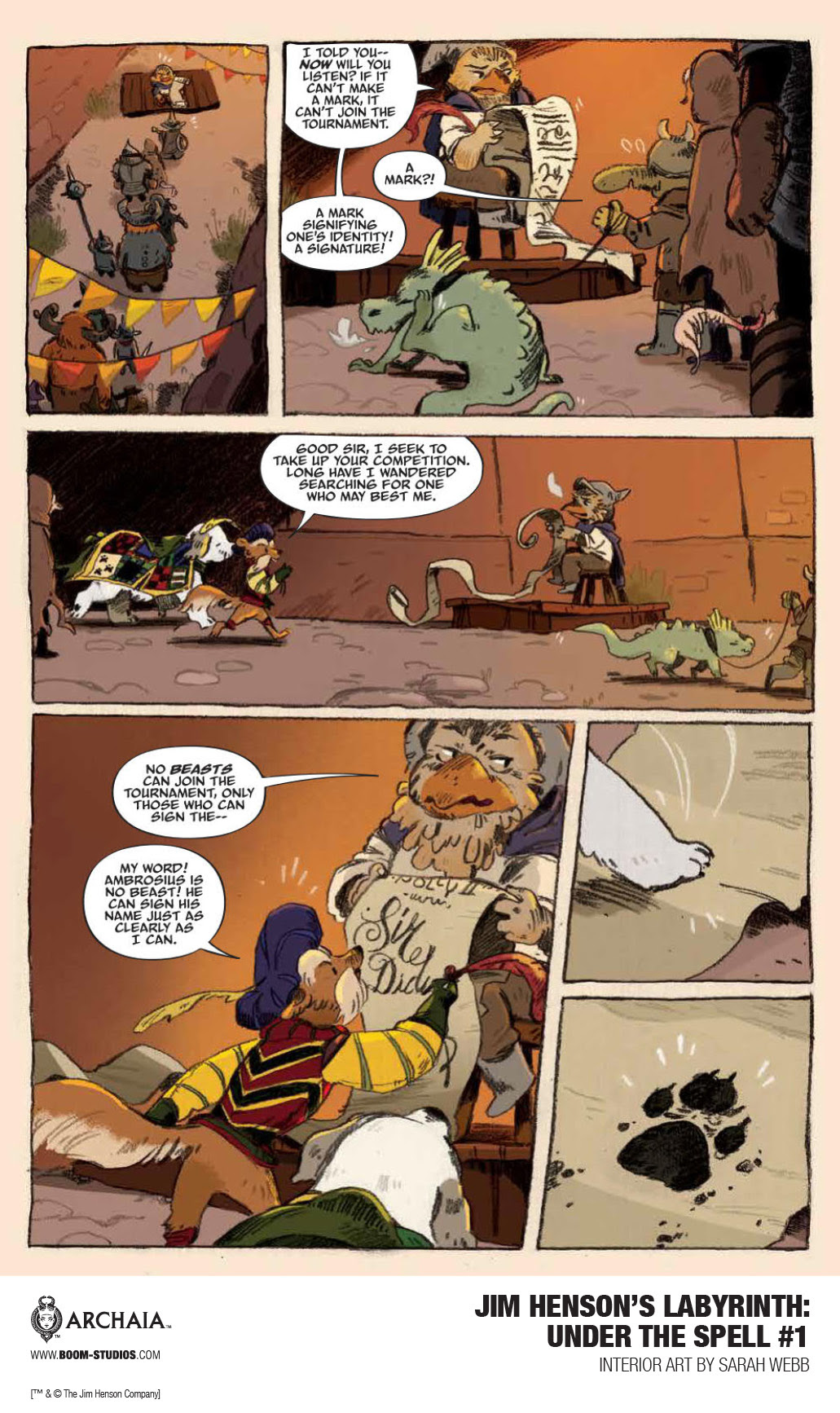 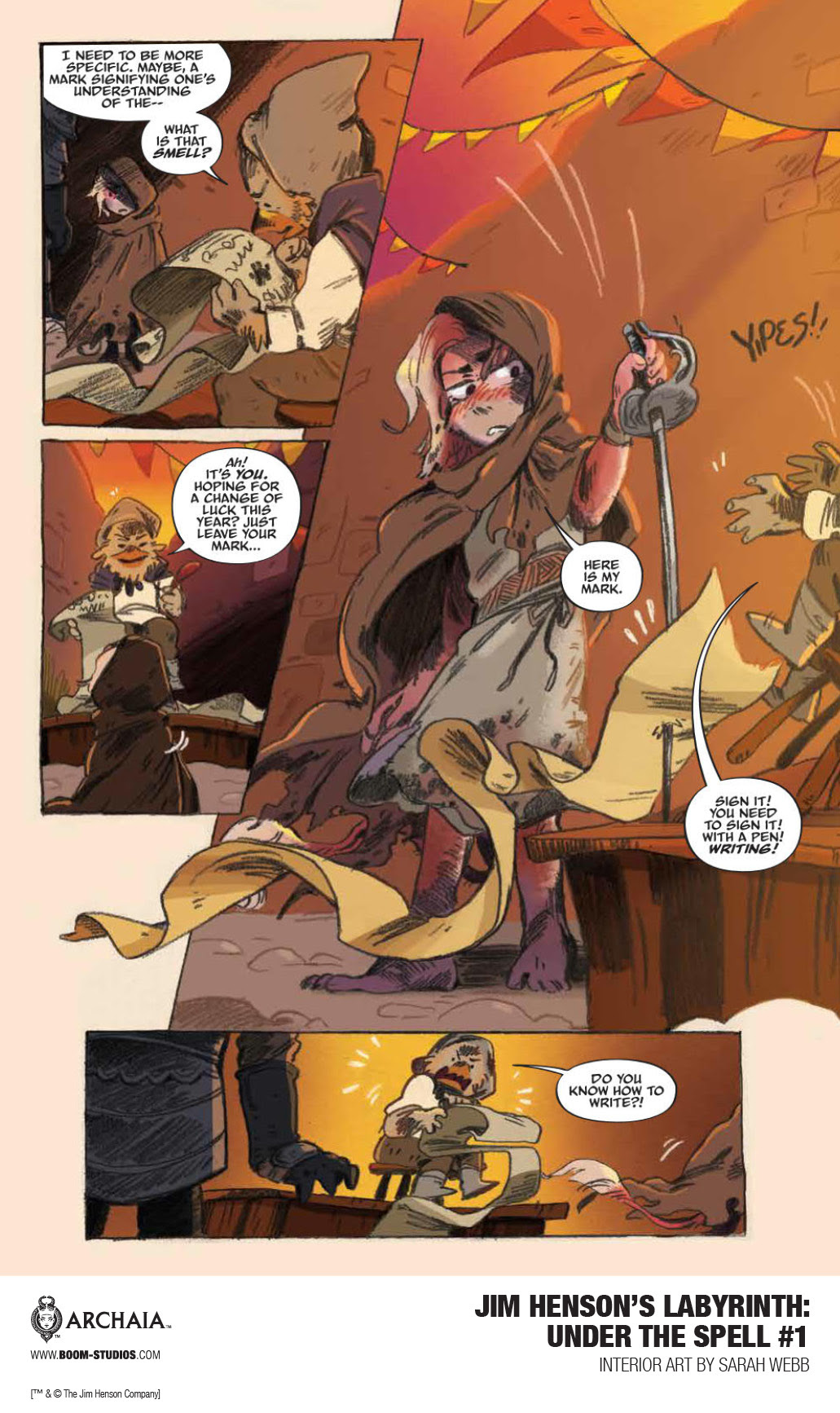 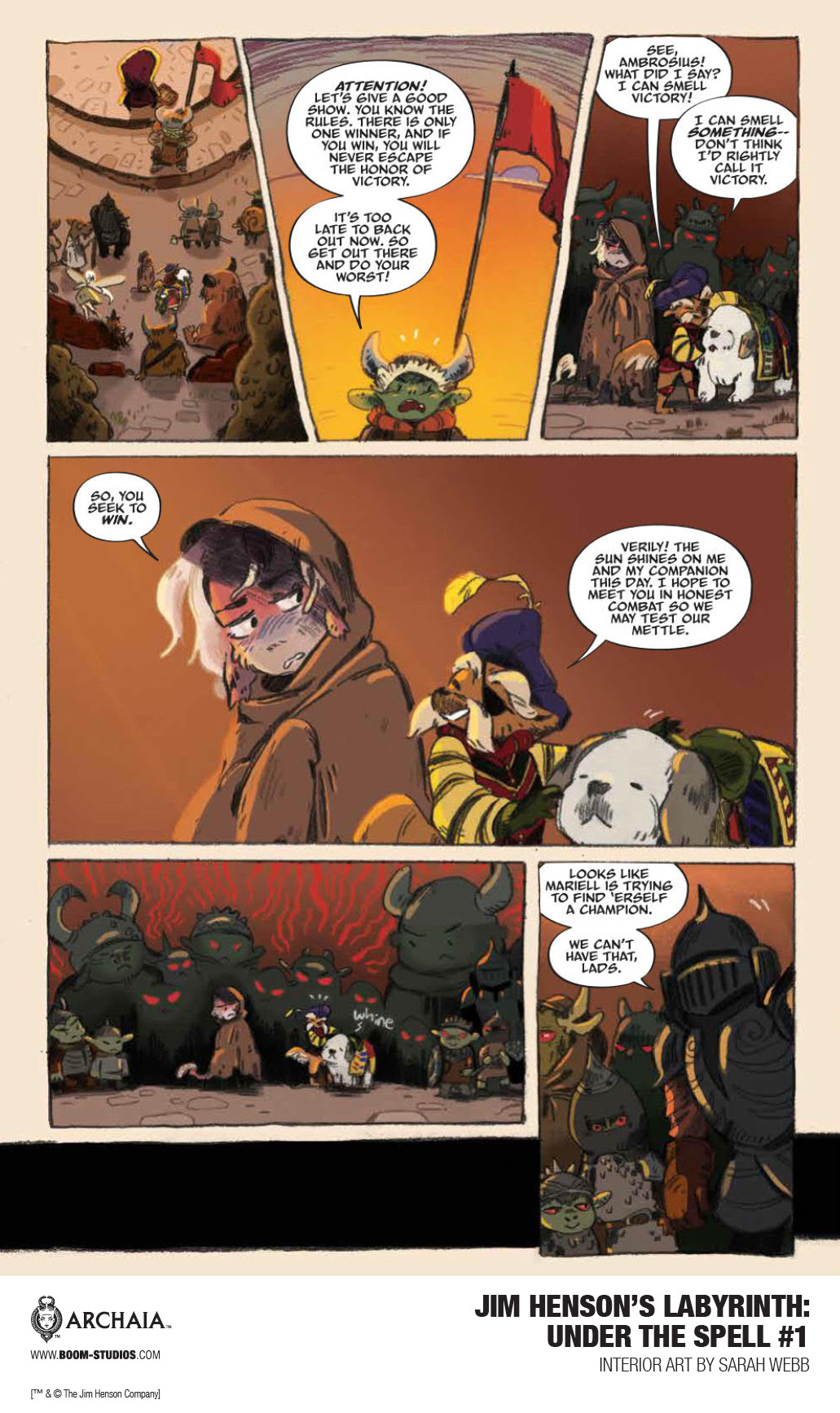 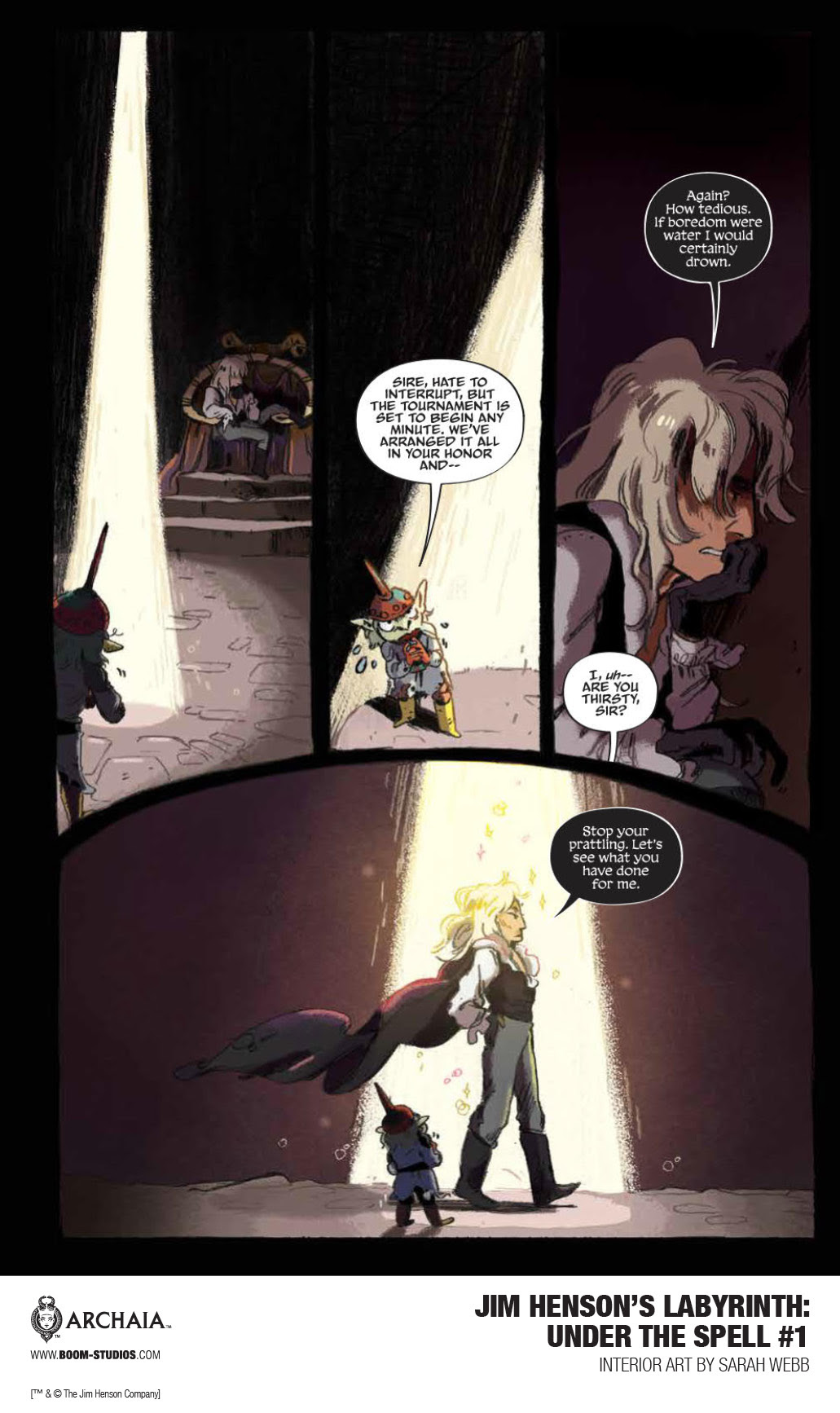 BOOM! Studios unveiled a first look at JIM HENSON’S LABYRINTH: UNDER THE SPELL #1, an all-new special collection of stories starring the strange and wondrous characters of Jim Henson’s beloved fantasy classic Labyrinth, including the reveal of the secret history of Sir Didymus and the vow he made to guard the bridge over the Bog of Eternal Stench.

Writer S.M. Vidaurri (Steven Universe: Harmony) and artist Sarah Webb (Kochab), alongside the talented creators Sina Grace (Iceman), Boya Sun (5 Worlds), and Michael Dialynas (The Woods) weave a tapestry of tales that brings us back to the Goblin Kingdom to face dangers untold and hardships unnumbered.

JIM HENSON’S LABYRINTH: UNDER THE SPELL #1 features a main cover by Rebekah Isaacs (The Thirteenth Doctor), along with a preorder cover by illustrator Richey Beckett and an incentive variant cover by Jeremy A Bastian (Cursed Pirate Girl).

“Labyrinth introduced fans to a world of endless imagination where anything is possible. There are always new corners to be explored and new revelations to be uncovered,” said Cameron Chittock, Editor, BOOM! Studios, “UNDER THE SPELL #1 shines light on fan favorite characters and introduces all new creatures to the canon, building on the ever-expanding world Jim Henson created.”

Print copies of JIM HENSON’S LABYRINTH: UNDER THE SPELL #1 will be available for sale on November 28, 2018 at local comic book shops.

For continuing news on JIM HENSON’S LABYRINTH: UNDER THE SPELL #1 and more from BOOM! Studios, stay tuned to www.boom-studios.com and follow @boomstudios on Twitter.