A Haunting in Camarillo, or, The Time I Saw a Ghost

Today’s column is a true story. That is, this is a story I believe to be true. To this day, I’m not quite sure what I saw that night at the park. It was many years ago, probably sometime in 2002 to be exact and my state of mind leading up to these events are questionable. But hell, it’s the Halloween season, so I’m going to do my part by telling all of PopLurker’s readers about that time I think I might have seen a ghost.

Now, let me preface with this– I do not know what my relationship with the undead or spirit world is. I guess it all comes down to me being a skeptic. I’ve seen and felt plenty of odd things. But I always insist my mind playing tricks on me, or it’s stress, or just my brain trying to understand a circumstance. People have told me they feel that I can sense energy or the unusual and I shrug it off with a “Sure, who doesn’t want to feel special?”

I could literally have a ghost two inches away from my face, and I’ll find a way to tell myself that I’m crazy and that there’s absolutely nothing there.

But in this story, I wasn’t the only one who saw it.

You see, back in 2002 when I was sixteen/seventeen, I was hanging around with a guy who was twelve years older than me– way too old to be having sex with an underage girl. For the sake of this story, I’ll call him Luke because he loved Star Wars. But note, that’s not his real name. Boyfriend…best friend…running mate. It doesn’t matter what our relationship was. It didn’t need a name when we were together.

Among the activities we indulged in together, one of our favorite things to do was sleep very little and find the darkness. That meant staying up for a few nights at a time (sometimes under the influence or not) driving around to who the hell knows where, and finding the darkest spot possible to park the car.

On this particular night, we found ourselves driving around in Camarillo, California very late at night. Maybe sometime after 11pm, or close to midnight. That time of night when the air is sharp and the dew and mist are starting to settle. Where the wind stops moving, and the chill begins to hover around you, thick. We located a random park, who knows where, after driving in what could have been circles. There were no lights on inside the park, which is bizarre for a Southern California park at night. Usually there’s some pointing toward the playground, or lighting up the basketball court. But at this park, the darkness was silent. 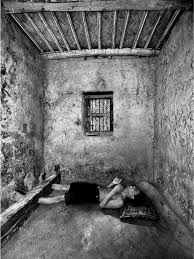 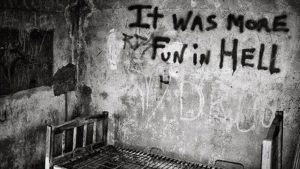 One thing to note about Camarillo is that back then, it was still spooky. It’s next to this port town called Port Hueneme (and all port towns feel haunted) and that scary-ass abandoned Camarillo Mental Hospital (that only shut down in 1997, only five years before this story takes place) hadn’t been transformed into Cal-State Channel Islands yet. So, as far as I’m concerned, there were still a lot of ghosts in the air in Camarillo.

We got out of the car, and decided to walk to the middle of the park, our breathing the only thing cutting the air. After making our way down a path, we found a bench and sat down. We spoke softly to each other, not wanting to break the atmosphere. But we both noted how very, very dark it was at this park. Even as a teenager I was a smart ass, and I remember making some comment like, “If all of these floodlights suddenly turned on, how many other sleep deprived couples do you think are hiding out here with us?” The comment made Luke let out a soft chuckle and nudge me with his elbow. I grinned; making him laugh was one of my favorite things to do.

But just as soon as my smile spread across my face, it froze. I took my eyes off Luke’s face and glanced directly across from me. Off in the distance, I saw something glowing blue. I didn’t question it at first because I assumed it was a soda machine. You’ve seen those before, haven’t you? A Pepsi or Powerade machine off in the distance is no big deal. But something about this one caught my eye.

Because I wasn’t sure it had been there a moment before.

By now, whatever I was looking at caught Luke’s attention too and his breathing caught in his throat. His eyes followed mine, and together from that seat on the bench in the middle of a park in Camarillo, we stared at something that was glowing blue. Because now, it started coming closer.

As the glowing blue object neared down a path off in the distance, I began to make out the shape of what I thought was a head. And this head was triangular. Now, it’s important to note that I’d never seen or played Silent Hill at this point, so I was never exposed to any media where something had a triangle-shaped head. And this one, was glowing blue and fixed to a body which appeared to be another (larger) triangle. The whole “thing” stood about 3 1/2 feet tall, if I had to take a guess.

But that’s not even the spookiest part of this story. No, it gets better. Because as this floaty triangle thing without a face came closer, the light it emitted showed me that it actually wasn’t alone. Next to it, floating in suspension, was the figure of a body wearing a hooded sweatshirt, with its head drooped down.

At one point, without looking at each other, without giving each other any verbal cues, without exchanging words or asking each other what the hell we were looking at, Luke and my hands broke apart and we jumped off that bench and ran. In complete unison, we launched ourselves out of that park, away from whatever we were seeing, or what we thought we were seeing, and we ran. We didn’t stop until we got to the car. We flung our respective doors open and dove inside. I’m not sure we were even buckled before he started the car and tore away, fishtailing and flooring the engine, desperate to get away.

We never breathed together.

Finally, after we were on the freeway, after the lights came back and the air lightened and the crest of the Valley was back in eyesight, I glimpsed at his face….which was painted with something I couldn’t read.

Something more than fear.

“What was that?” I whispered.

Luke shook his head. “I don’t know,” he said, his voice breaking to a whisper.

We never spoke of it again.

Not too long after that, our relationship became toxic and dissolved. He thought drugs were more important than my company, and I thought my future was more important than him. I hung out with him once or twice five year later when I was twenty-one, but the magic of our storm was gone. It’s been nearly thirteen years, and I highly doubt I’ll ever see him again.

But if I did ever see him again, I’d ask him what he saw that night at the park. Ask him to exchange stories with me and see if we really experienced the same thing. Because while I’ll never be sure if what I saw was truly an alien, a ghost, or the sleep deprived hallucinations of a teenage girl who should have been safely tucked into bed, there’s one fact that I know. Whatever the thing was startled Luke, a guy who thought attachments and feelings were for weak people, to the point where he held my hand.

Which means he must have been pretty scared, too.