We’ve made it to issue three in our series of Rainbow Brite comic book reviews. Written by Jeremy Whitley, illustrated by Brittney Williams, and published by Dynamite Entertainment, you can find my reviews of issue one and issue two on those neat hyperlinks there.

I was a little late getting to volume three, unfortunately, but that does mean that I will get to volume four a little faster. Now in the interim between my issue two and three reviews, Dynamite announced that they were canning Rainbow Brite after the fifth issue, which means that effective this month, Rainbow Brite, or at least the current arc, is officially over.

When I published that news on PopLurker’s sister site Toy Wizards, there was some negative backlash. I received accusations of ‘Well you don’t know it’s been cancelled’. But let me give you some information I’ve learned from working closely with people in the comic book industry. First, when it’s decided that a preexisting IP will become a new comic, it is often assigned to a reluctant writer. Therefore, it leads me to wonder if Whitley was given Rainbow Brite, or if he and his team won the winning pitch story after Dynamite told their staff that they won the rights to RB.

To this day, as I said in my issue two review, Jeremy Whitley is not the correct writer to carry this torch. And for anyone out there who wants to tag him in this review, throw me under the bus, and make it look like I have some vendetta against his writing as a whole, I’ll be the one to say it first; I do not. But you have to admit that with any franchise with a thirty year history and fandom, you have to be very careful about how it is handled.

Looking at you, Dreamwork’s She-Ra and the Princesses of Power.

Second, with comic books, Whitley had stated that he had enough of an arc and story material for ten issues. He said that– it’s a direct quote. And although your publisher wants to make sure you have enough material to carry the story through, it’s 100% common and within standard that they will short order the series and give you anywhere from 3-6 issues. And depending on how well those perform, they will order more of them. This is how television and cartoons work as well; nothing new.

Therefore, this comic book series has been cancelled, or if we don’t want to use that word, the arc has been cut short.

Bearing all of that in mind, let’s discuss what’s happening here in issue three. I have to say that ultimately, I’m just really not so into this comic book. I was super hopeful and it’s not deliver. The way the characters talk is fatiguing (which coincidentally, is the exact same problem I have with Dreamworks’ She-Ra. The voice direction wrings my soul). The art is fatiguing as well. I’m truthfully tired of seeing these characters drawn in this style. Because I was in love with the teaser art I saw. The covers are stunning. I want to see this: 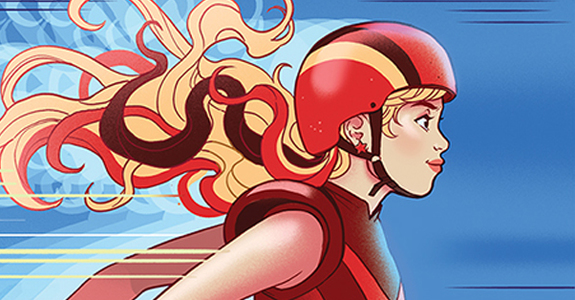 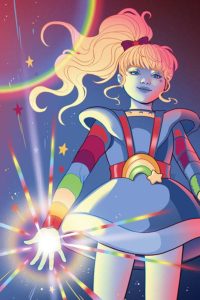 But I keep seeing this:

As for the story itself, it moves along all right. Wisp has just met Murky and Lurky. After grabbing that scepter and becoming Rainbow Brite, she uses it to heal a dog that had the color sucked out of it. She gives the dog back its color, and in return the dog ‘doesn’t belong to the Shadow King, she belongs to herself’.

I continue to really love Murky’s outfit and plan on wearing a similar outfit daily because it’s so freakin’ metal.

What I continue to dislike is the dynamic between Wisp and Twink. Again, I don’t think it’s wrong to stray from the source material and create a new world. But the creative team here has completely botched everything that made the original Rainbow Brite story so special. For example:

One fatal flaw of the writing here, and I addressed it in issue two, is that Willow is still absent. Remember, Willow was Wisp’s friend in issue one who was the first character that we saw on the pages. But now, she continues to not be mentioned or seen. That is bad writing. If you introduce a character, the very first one we see, you need to follow through and circle back to them. And this could be accomplished very easily; all we need to see is while Wisp is experiencing her Rainbow Land adventure, Willow is back in their world freaking out and making plans, desperately trying to figure out how to reclaim her friend. Or, she could replace the Brian character, and be the person that anchors the reader back to Earth. Maybe while there are color battles in Rainbow Land, Earth is starting to experience some weather pattern weirdness, which is something we know happens in this universe because of the B-Plot in Rainbow Brite and the Star Stealer. While the Dark Princess is covering Spectra with ropes, it makes it so the light can’t pass through and affects the color and weather on Earth. IE: Forever Winter.

All right- so, wrapping up issue three. Wisp saves the dog. Murky and Lurky escape. Wisp doubts herself. Twink gives her a pep talk. The scepter stops working. Needs a color power reload. Twink says they need to go to the red color realm. Which is like…conveniently right over there. Like a floating island across the street.

They jump over to it, Wisp slips, is about to fall for her doom, and a hand pulls her up. Alas, we meet the red Color Kid.

Here’s one thing I like– Red Butler has been (seemingly) replaced by Red Flare. I really hope this is a completely new character. If I felt like the characters were done justice, I would crave to see Red Butler. But they’re not– all the characters are bummers. So screw it, let’s have a new red color kid. I’m ready.

In the two issues we have left of this arc.

I hate being a complaining grown up whiny pants lady who dislikes something just because it’s not being made to my prescribed specifics. That’s not the case at all– Rainbow Brite very well could come back. And if I’m not the target audience here because it’s now a story for kids, great. I get that. But I have a ten year old half sister. And I’m going to give her these comics when I’m done so she can read them and tell me what she thinks. Because I’m super, super curious how this story is being taken. Clearly, if the sales were good or the story was embraced by fans, it wouldn’t have been cancelled. There is no denying that.

Hopefully once this arc is complete, Dynamite will have the foresight to let another writer take a crack at it. The secondary artwork and covers shows me that someone involved understands that there’s magic in this series. That there’s a layered, deep, and beautiful world waiting to be reborn for a whole new generation of readers.

Unfortunately, it’s still somewhere in that cave along with the color belt.